FROM STAY AT HOME MOM TO GARDEN TV HOST!

Landscape and edible garden designer, Shirley Bovshow teaching how to grow pumpkins on the Home & Family show on Hallmark channel.

Becoming a “stay at home” mom opened the door to a dream life and career I never expected or even knew existed!

I’ve always been a career-oriented person and have pursued all my goals to success.

I  was a successful real estate agent when my husband and I became pregnant with our son in the mid 1990’s.

Already a part-time mom to my two step daughters, I devoted myself to them and didn’t work on the days they were with us.

It was strange, and very unlike me to NOT work, especially since I had been working since I was 13 years old.

Ironically, I felt compelled to stay home with the kids and it wasn’t until a few years later that I realized my FUTURE hinged on this time at home.

So, I settled into my new role as homemaker and added another daughter to the family two years later!

Staying at home with two kids was a challenge for me, but I knew it was the right thing for me to do.

I missed my career and the social buzz at the office.

I relished my time with the kids, but yearned to do more with this “undefined” creative energy I felt growing inside me.

Shirley’s kids enjoying a snack together.

My heart said, “Put the kids first,” and I would have it no other way.

With the slower pace in life, I discovered some things about myself that changed the trajectory of my life!

MY MOM, MY MUSE

Shirley as a child with her mom and siblings.

Growing up in a family of six kids, my mom was a dedicated stay at home mom AND a prolific, Spanish-language journalist!

I decided to follow her strategy and lead a double life.

During the day she was a full time, hands-on mom and homemaker, and while my siblings and I  were tucked in bed for the night, my mom indulged her passion and talent for writing newspaper and magazine articles.

As a lay in bed, I was lulled to sleep by the sound of her Underwood typewriter keys striking the paper. It was like a comforting melody that I became accustomed to and associated with my mom.

When we slept, it was her time to speak with her fingers.

MY TURN:
“While they were sleeping”

I took up gardening as a hobby because it was physical, creative, and I could indulge in it while the kids napped, which was often, when they were toddlers.

I designed and redesigned my yard every week much like a budding beauty school artist experiments with different  hair colors every week!

The yard was in a state of flux for years, it was out of control, and so was I!

I didn’t know what I was doing, but I was having fun learning  and people were noticing!

I told them the truth:

“I don’t have a garden designer, I designed the yard myself, but I’m not a pro, I’m just a stay at home mom!”

Most people didn’t care that I wasn’t a professional, they still asked me to design their yard.

This was the first time in my life that I was accused of being “artistic” or creative!

Because of the many offers , I like to say I became a garden designer “by request.”

BUT…I didn’t accept any offers to design until I learned professional standards.

I enrolled in landscaping school when the kids started preschool and started accepting clients soon after.

Through client referrals, I  began to book projects a year in advance with no advertising!

Despite a heavy workload, I worked around my children’s schedules, committed to being present with them during their waking hours.

It’s when they went to sleep, that I went into overdrive!

Just like MY mom did when I was a little girl.

(I also realized that like my mom, I had a ridiculous surge of energy every night!)!

Designing into the wee hours of the night, I managed to wake up refreshed with 4 hours sleep.

I dropped off the kids to school, and I went to my landscaping projects.

Shirley with family in the literacy garden she designed at Welby Way Elementary.

I organized my schedule so I could spend a few hours each week at school volunteering in the kid’s classroom and school garden.

Of course, the school garden!

A few years after opening the doors to my landscape design business, I auditioned and won the role of co-host of the “Garden Police” TV show  for the Discovery channel. 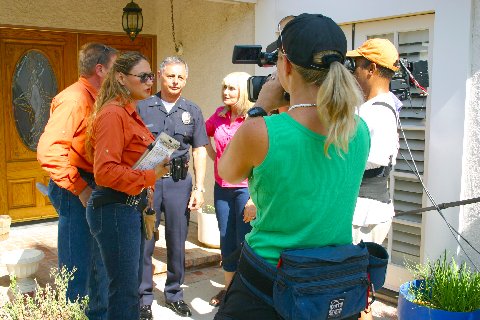 My partner, Michael Glassman and I transformed the ugliest front yards in the neighborhood into the most beautiful ones! 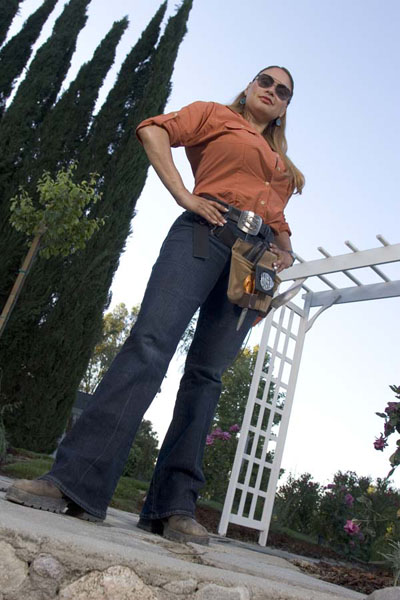 Thus began my television career as a landscape and garden lifestyle expert and host!

A few years later, my career morphed into another career based on my expertise.

After appearing on numerous national TV shows and speaking around the world, I started “Garden World Media,” a garden-centric media company specializing in producing videos in the landscape/garden genre.

In 2013, I was asked to join the cast of the “Home & Family” show on the Hallmark channel, as the landscape and garden lifestyle expert.

The nationally broadcast show has been nominated three times for an Emmy, and is in its eighth season as of this writing.

Outside of the Home & Family show and other television appearances, I still design landscapes in Los Angeles, especially lawn-less yards and edible gardens.

HOUZZ.com has awarded Eden Makers Garden Design the coveted,  “Best of HOUZZ Design” awards  six years in a row, since 2012.

Shirley shows how to make hanging ornaments from dehydrated fruit on the Home and Family show.

Before I became a stay-at-home mom, I had no idea that I was born to be a garden designer, that I was creative and artistic and that I’d be inspiring millions of television viewers and internet fans to connect with nature!

Landscape designer, Shirley Bovshow attends a red carpet event for the Hallmark Channel in Pasadena, CA
Me?
A garden designer?
A television personality and host?
Yes! But there’s more!

I’ve got my feet firmly planted in the ground, my heart directed towards God, and my hands reaching for the stars!

The Bovshows when the kids were little.
With the birth of my children came the birth of a new career path and identity for me.
I don’t believe I would’ve discovered my latent talent as a designer had I not obeyed my hearts’ call to stay home with my kids!

It wasn’t easy, but it served a purpose for both my kids and myself.

I’m proud of what I’ve accomplished so far, while my “kids were sleeping.”

Please subscribe to my Eden Makers Blog for updates on new articles as well as notices for giveaways and contests!